The largest urban re-generation project in the UK designed by PRP Architects uses Metek’s light steel framing to construct over 800 houses and apartments in a variety of tenures.

The re-development of a decaying area of Lambeth in south London has been completed in double quick time by using Metek’s light steel framing system. The former Myatts Field North Estate was completely re-modelled to create the ‘Oval Quarter’, which is a vibrant mixture of private and affordable housing in a wide range of building scales.

Architects PRP reproduced the familiar London Georgian terrace in a modern style using featured brickwork up to 6 storeys high, which is laterally supported by the light steel structure. Originally conceived in blockwork, and then in timber framing, Metek’s light steel framing was finally chosen as the structural system by the main contractor, because of its speed of delivery and its fire resistant properties, especially during construction.

Phase 1 of this major urban regeneration project consisted of 24 separate buildings, of different heights and tenures. The larger buildings were arranged as a ‘cluster’ around a courtyard. The largest cluster (known as Site 19) consisted of four groups of 4, 5 and 6 storey apartments and two groups of 2 and 3 storey housing.

A total of 820 housing units will be created overall, of which 491 units were in Phase 1. Of this phase, 27% of the units were privately sold, 23% part-buy part-rent, 36% social rented and the rest were in other forms of rented tenure. Many residents from the original Myatts Field Estate took up the local authority allocation of rented homes.

The majority of the apartments are two bedroom and are of approximately 80m2 area, with some three and four bedroom units. All apartments have some private space, either through balconies or roof or ground floor gardens, and also meet the requirements for Lifetime Homes. Refuse is collected by an unobtrusive system of recessed chambers at the roadside.

A novel district heating system in the form of Combined Heat and Power (CHP) was constructed at the periphery of the site and provided hot water heating that was delivered and metered to each house or apartment. Heating was in the form of radiant panels in the ceiling which obviated the need for wall mounted radiators. The overall floor depth was only 500 mm allowing 120 mm for the radiant panels. The floor-floor height was 2850 mm.

The target U value was 0.19 W/m2K for external walls and 0.15 W/m2K for the roof with an air permeability target of 4m3/m2/hr at 50 pa. Acoustic insulation requirements were targeted at 3dB better than the Building Regulations (2010) for both airborne and impact sound. The project satisfied the requirements of the Code for Sustainable Homes Level 3 at the time of the design and later phases will satisfy code level 4. Photovoltaic panels were included in some buildings.

Metek provided all the light steel frames and floor joists, and the structural steel for the lift cores and stairs, and pre-cast concrete stairs. The Metek programme for the 490 units in Phase 1 started in October 2012 and ended in October 2013, and the rate of progress was one floor every 1.5 weeks. In one case, a terrace of houses was built in only 7 days. Metek also designed and built the reception/sales centre for the project, which has a fully glazed façade.

The overall project value is estimated as over £110 million for this 60,000 m2 housing project, making it the largest urban regeneration project as well as the largest light steel framing project carried out to date in the UK. The same construction system will be used in the 20 separate buildings in Phase 2 which started in late 2014. 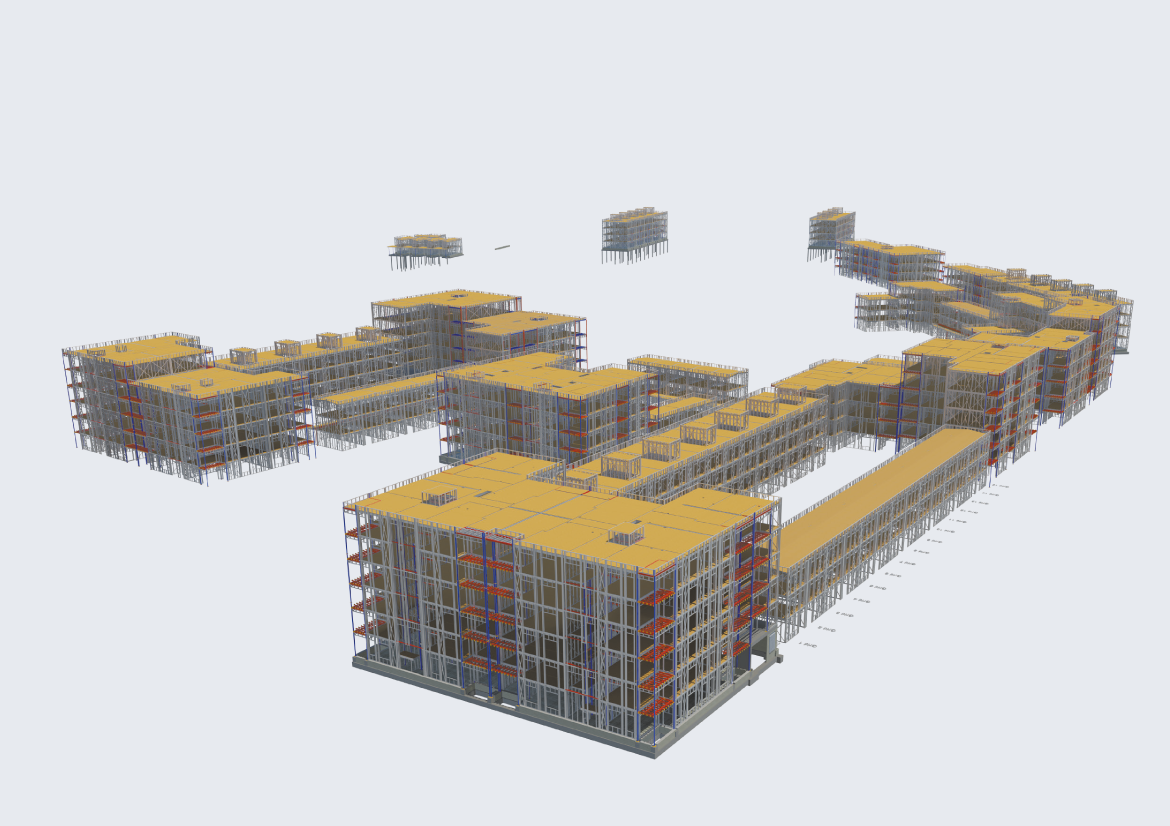 The project consists of a mix of 2 and 3 storey houses, 4, 5 and 6-storey apartments, and 4-storey maisonettes, which were designed in a consistent style by PRP Architects. An innovative aspect of the project was the supply of local heat and electricity by a dedicated CHP facility and individual units are metered for hot water delivered via this supply.

Metek’s light steel framing system consists of load-bearing walls and 250 mm deep C-sections that span up to 6.5m. Some floors were delivered as ‘cassettes’. The floor and roof joists were manufactured in thicknesses of 1.2 to 2.4mm for different spans and were spaced generally at 400 mm cs.

Acoustic insulation was provided by a 21 mm deep ‘Screed board’ above the joists and two layers of 15 mm fire resistant plasterboard, a service zone, and a further layer of plasterboard ceiling below the joists.

The load-bearing structure was entirely composed of 100 mm C-sections in double leaf form for separating walls and single leaf for external and internal walls within the units. The C-sections ranged from pairs of 100 x 1.6 mm C at the ground floor of the taller buildings to 100 x 1.2 mm C for the upper floors. The terraced houses had no internal walls, which allowed for maximum flexibility in layout. Future lift access was achieved by use of ‘knock out’ panels in the floor.

Balconies were prefabricated and installed in sizes up to 3.5m x 2m. They were built from 100 mm x 100 mm SHS posts that were embedded in the external walls and 200mm deep perimeter PFC sections. Metek built the balconies and installed the pre-cast concrete stairs as the work progressed. 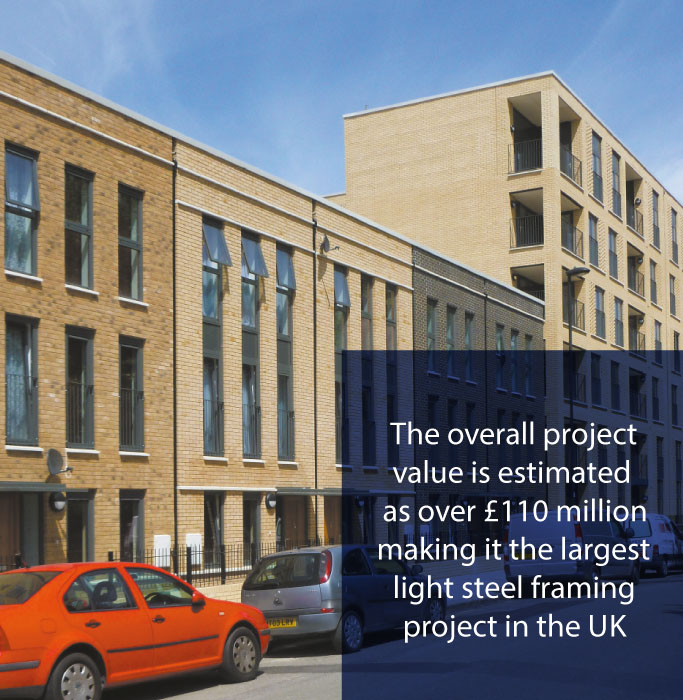 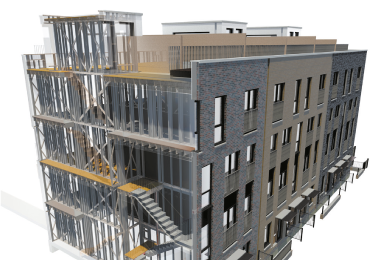 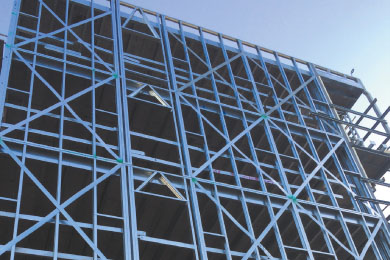 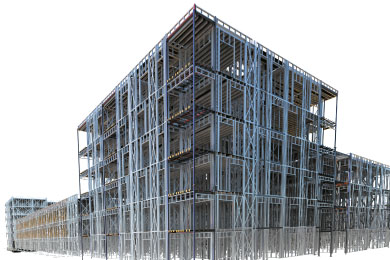 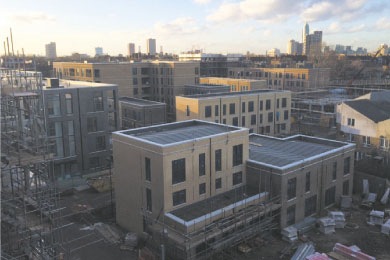 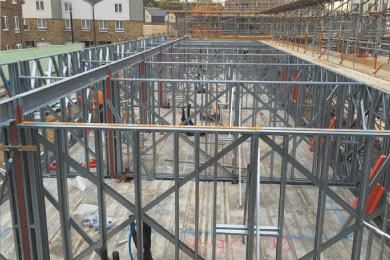 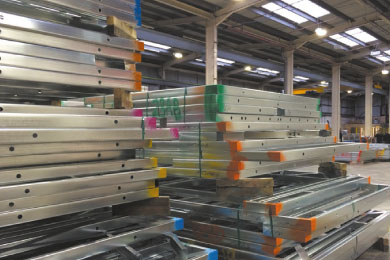