Light steel framing proved to be the perfect solution for a complex corner site with limited on-site storage space and with an existing brickwork retaining wall that the light steel structure had to cantilever over.

A new student residence comprising of 87 en-suite rooms and 46 contemporary studios has been completed on the corner of Anchor Road and Lower Lamb Street in the busy waterside area of Bristol opposite Millennium Square. The 7-storey building, called Harbour Court, was developed by the contractor in partnership with the University of the West of England. The light steel package was delivered by Metek who had worked with the contractor on two successful 8 storey residential buildings in Taunton.

The upper 6 floors were constructed over a basement contained within an existing brickwork retaining wall up to street level, which could not be loaded by the light steel framing. Therefore, the new light steel structure had to cantilever over the basement at ground and first floor levels, which was solved by introducing steel Universal Beams into the light steel solution, and these beams supported the façade at the upper levels.

Construction of the L-shaped building began in October 2013 and was completed in September 2014 ready for the new term, which necessitated a very fast programme. Metek provided the light steel walls, floors, and roof as well as all of the structural steelwork and pre-cast concrete stairs, which were installed progressively on each floor as part of a single installation package.

The site was confined by adjacent buildings and so all panels, steel members and precast units had to be delivered ‘just in time’ for rapid installation by the single tower crane. Metek’s construction programme was constrained by the completion of the concrete platform at ground level but reached an impressive floor every 2 weeks, and included cement particle board sheathing. Bathroom pods were later moved into place on the floor by designing a wide corridor zone within the light steel framework.

The structure was X-braced on almost all walls, and on the lower ground floor, an additional moment-resisting frame with inclined struts was introduced over the cycle storage areas to provide stability. The three stair corners were built using Square Hollow Sections (SHS) for the columns and beams and were also braced by inclined SHS struts. The pre-cast concrete stairs were built to precise dimensions and installed at the same time as the steelwork. A complex 3D model was prepared using all of these components which ensured high geometric accuracy.

Cladding was in the form of rain-screen tiles and panels on the road-side and a rendered composite panel system on the courtyard with featured bay windows that were supported by SHS posts placed within the light steel façade. 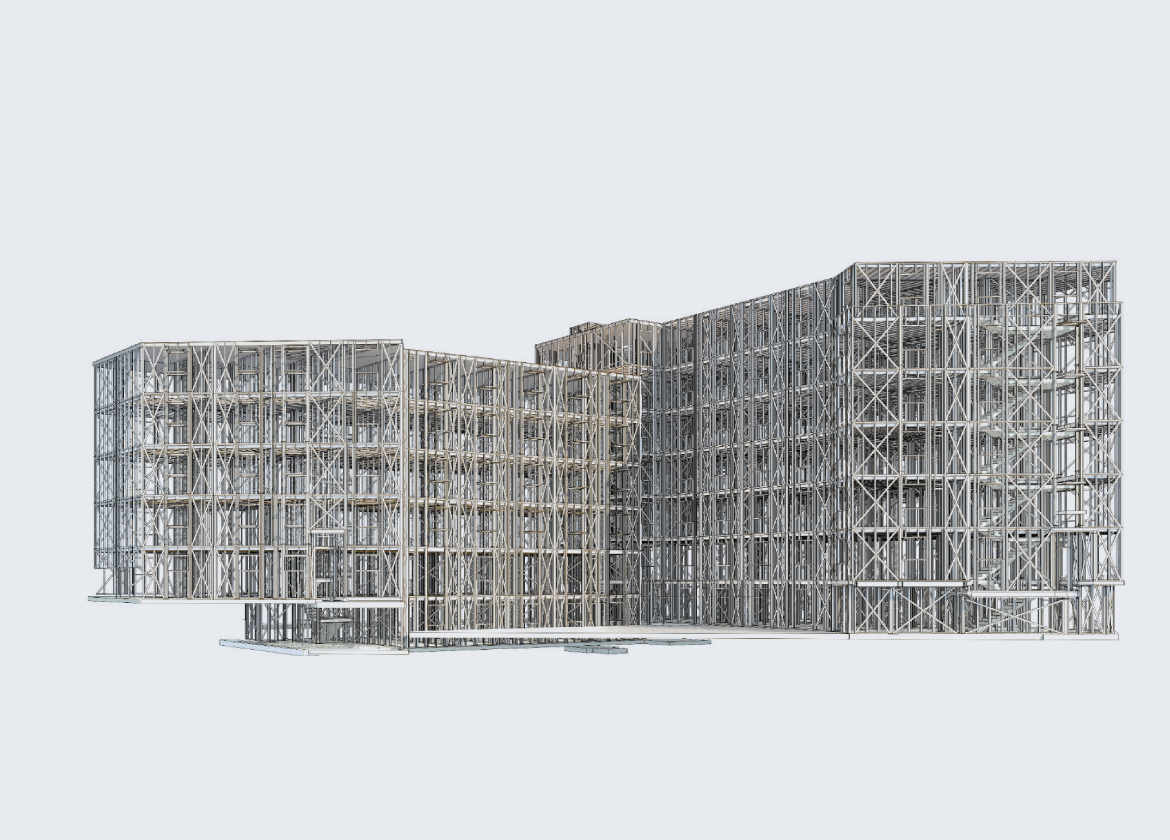 The building consists of light steel load-bearing cross-walls using pairs of 100 mm x 1.6 mm C at lower levels, which supported 200 mm deep floor joists with spans up to 4.8m. The floors also supported pre-fabricated bathroom ‘pods’, and in the region of the ‘pod’, the floor joist depth was reduced to 150 mm to achieve compatibility of the final floor depth between the room and the pods. Floor cassettes were pre-fabricated and installed as large units on the upper levels.

Slim floor beams consisting of 200 mm deep SHS of various thicknesses, were used to support the floor joists without requiring down-stand beams, and were used over spans of 3 to 5.5m.

At the lower ground and ground floor, complex beam and post arrangements were required to accommodate the reception area, and in the highest load case, a heavy 300 x 200 x 16 Rectangular Hollow Section (RHS) beam supported a 100 x 100 SHS post which was loaded by 5 levels above.

Additional steelwork was provided around the cores, and on the southwest side of the building, the core projected 0.6m over the lower ground floor, which required use of projecting 200 x 200 SHS beams. The connections between RHS beams and SHS posts were made by welding ‘stubs’ to the posts which had a welded end plate with a minimum of 4 bolts.

This allowed the connections to be made away from the post, and the end plate was contained within the floor zone.

At the lower ground floor, a braced steel framework was provided over the cycle storage area, which used 254 x 143 x 43 kg/m UB beams that spanned 4.3m and 203 x 203 x 60 kg/m UC columns that were stabilised by inclined 150 x 100 RHS struts to the columns. At the periphery of the building 305 x 102 UB and 457 x 152 UB beams were used at ground and first floors to support the projecting façade over the existing basement wall. 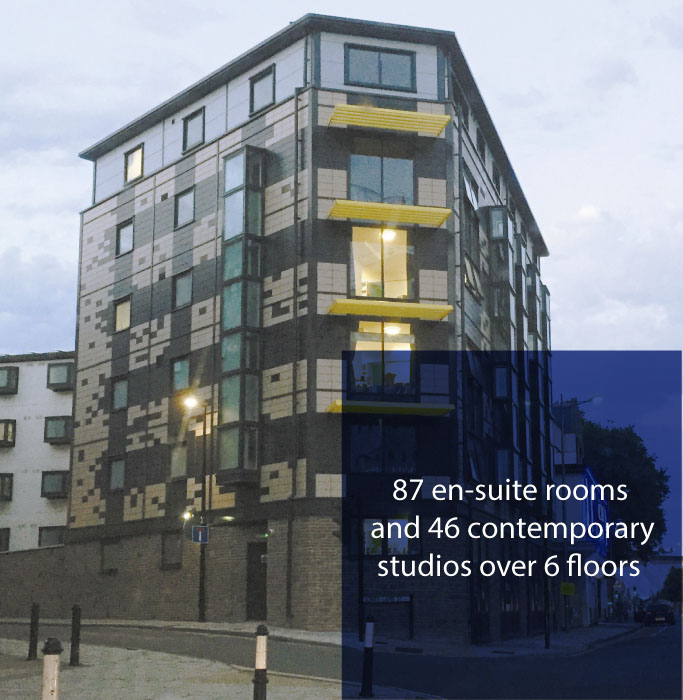 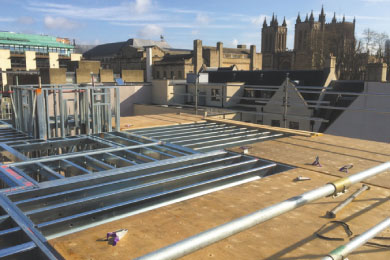 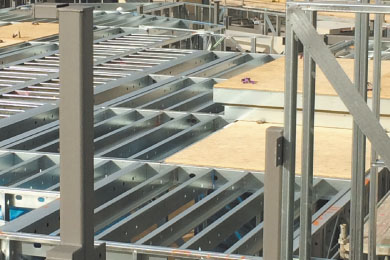